The dreaded first birthday.  Some people go ALL out, I know parties that have hundreds of guests and thousands of dollars spent!  Though I wanted to do something special for her first birthday, we are not quite on that level.  We also don’t have many friends, even fewer with children, and our family is quite small, so that meant our guest list was automatically tiny.  We were perfectly fine with that.  I was able to reuse all the tableware from my baby shower, which is why I chose the pink and purple theme for her birthday in the first place.  We call her “Bug,” but since ladybugs or bumble bees don’t go well with pink, I opted for butterflies, which are one of my favorite things anyway.  I didn’t DIY as much as I would have if the party was bigger, but I did do a few cute things so I wanted to share them with you. 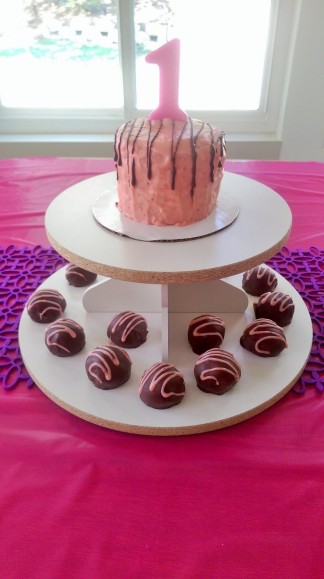 I searched and searched for recipes that were both “healthy” but also something that I could eat with all my darn allergies.  I could have made two cakes, but I love the pictures of the baby feeding their smashed cake to their parents, so I wanted to make sure that if that moment happened I didn’t have to turn her away.  I finally gave up and settled on white cake and strawberry frosting.  I mean, strawberries are a fruit right?!  That has to count for some healthy points!  Just ignore the pounds of butter and powdered sugar mixed with said strawberries.

I am really happy how it all turned out and it tasted super yummy!  We had leftover cake and balls for a week and oh darn, I was forced to eat them all. 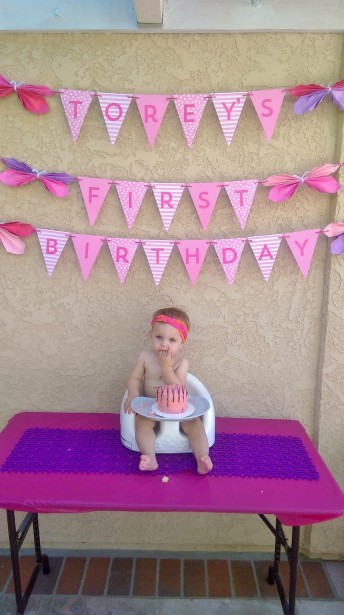 Dress and Bloomers:  You would not imagine how difficult it is to find a cute little girl’s dress that has pink and purple butterflies that is NOT tacky.  Near impossible!!  I finally found a store on Etsy that had fabric I liked, and asked them if they could make a dress out of their fabric and bloomer covers to match.  They were happy to do it!  Victory!

Headband:  I made her headband using this video tutorial and an old stretchy skirt I had that just happened to be orange and pink and already cut up from another project.  This is why it is important for a true crafter to save everything!  You never know when it will be useful again.

Shoes:  I got adorable pink floral shoes from Target.

That was it, all of the decorative festivities.  I had pinned a lot more on Pinterest and I would have done more if we had a larger party, but I am happy with what we did and it was much less work!  Is it bad I am already planning her second birthday?  😉

Thank you for visiting Wrighting It Down! If you enjoyed what you read, please follow my blog to get my latest posts. Feel free to look around and check out some of my other posts too!